This mask is made from papier mache and is suitable for wearing to a Masquerade Ball, Fancy Dress, Carnival or Day of the Dead celebrations, or it can just be hung on the wall as a piece of art.

Please read below for a more detailed description of how and what this Catrina mask is made from.

This is a one-of-a-kind mask and whilst the studio may make other masks based on the legend of  Catrina La Calavera Garbancera (elegant skull), there will only be one Catrina Posada.

This RaineMaker Mask named Catrina Posada is a Sugar Skull (La Calavera) mask inspired by the etching of Jose Guadalupe Posada from 1910 depicting a tall elegant skeleton with a wide brimmed hat adorned with flowers and feathers, she has since become an iconic symbol of the Mexican Dia de los Muertos (Day of the Dead) celebrations.

Catrina Posada is a fully wearable mask made from papier mache with a felt half-hat attached and is decorated with artificial flowers and purple and brown ethically sourced Ostrich feathers. It also sports a shimmery grey lace veil which falls gracefully behind the wearers head. Her face is painted with acrylic paints and sealed with a crackle glaze which has been aged with a bitumen and wax patina.

She has ribbons for wearing and a ribbon loop so she can make the transition from wearable mask to much admired 3D statement wall art.

Catrina Posada comes with her own Certificate of Authenticity.

There are no reviews yet.

Only logged in customers who have purchased this product may leave a review. 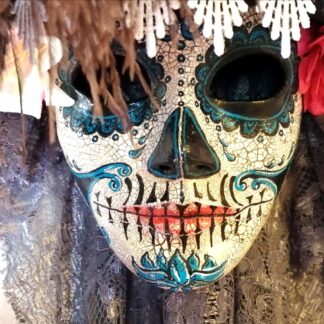